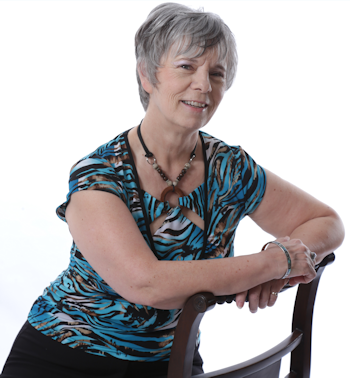 Despite her knocking knees, Sue got her first audience applause at age 10 after reciting a poem at church.  Drawn to the front of the room, she started teaching a personal growth program in her late 20s. By 34, she was developing and conducting corporate workshops. At 42, she traveled Alberta as a paid speaker on topics such as stress reduction, conflict resolution, and team development.

A self-taught educator, Sue began the first of her 15 years of part-time teaching at MacEwan University in 1996. Her topics – business writing, public speaking, and study skills.

In 1999 she wrote and published her first best-selling book, Tips & Tools for Student Success. It was followed in 2003 by her award-winning Tips & Tools to Speak with Confidence – Keys to Finding Your Voice.

For her 50th birthday, Sue successfully challenged herself to perform 5 minutes of stand-up comedy on Amateur Night at Yuk Yuks.  She has worked as a voice-over artist, composed music, coached budding speakers, and appeared as an expert on TV/radio shows and on podcasts.

Thriving since her near-death experience in 2007 and two bouts of cancer in 2011 and 2012, Sue published her memoir Magnificent Misery – From Adversity to Ecstasy in 2015. She has since launched her free app, The Magnificence Mentor.

Her passion now involves inspiring cancer survivors to Be their magnificent selves through healing and sharing their stories. (Oh and devouring multiple soft ice cream cones with her twin granddaughters!)